a way to facilitate neuroplasticity clinically

Maxine Haller provides world-class training in the Haller Method around the country and the world. If you would like to learn more about what she does and integrate it into your practice then sign up to one of the regular classes. If you would like Maxine to provide training in your area, and you can get together a class of at least 16 students (the magic break even number) , she is happy to deliver in your town or city. IF you can swing 18 that generally feels good and 17 gets a free host seat.

The Haller Method has achieved stunning successes in much shorter timescales than is usual for treating a number of common neurodevelopmental problems. It starts at the very beginning of dysfunction, placing building blocks crucial for later success. It would seem that these are circumvented more and more in today's world of less movement, more stress.

What is the Haller Method

The Haller Method is a holistic way of approaching clinical dysfunction. The basic premise for the approach is that all engagement has a muscular component. Since the definition of dead is no movement, this would seem to hold true on a very large scale; and if any engagement is going to change, the muscular contraction pattern associated with that engagement has to change. Taking into account six areas that affect the vast majority of clients seen for therapy, and that influence muscular patterns in profound and specific ways, these muscular patterns are deliberately influenced and changed via activities that produce the engagement change that is wanted. We have found that if you don’t address all six areas at some point, there is not complete resolution of what you are working on.

All of that can sound very ungrounded, so let's look at an example. 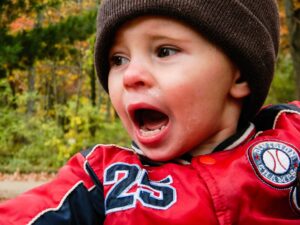 control of itself - often producing screaming of variable decibels, usually some crying and tears, often a version of slumping to the floor which would be some sort of flexion to start and then a piece that involves throwing the head back and kicking. Hands will often be fisted and eyes squeezed closed. This type of engagement disrupts the child's ability to finish an activity, which would exhibit itself by a completely different muscular pattern. Finishing a task would more than likely involve some version of sitting at a table, legs not moving, voice NOT producing varying decibels. Hands would be open and using a utensil of some sort to produce an end product that would be liked by Mom. Head would be forward, eyes open and butt would be on the seat

Often the change in muscular from the unwanted pattern to the desired pattern is assumed to be created by instruction and commands sometimes delivered by authorities, very loudly. If the auditory input is not producing the muscular change, all variations from “let me show you”, to punishment and physical force (read: pick the child up) is used to produce the muscular desired change and ensure the engagement appears to be happening in an acceptable manner.

However, if looking with the Haller method lens, this disruptive engagement may have underlying influencers such as immaturity, primitive reflex activity, poor attachment and limbic growth, stress profile dysfunction, trauma or even perhaps poor nutrition or gut disruption, and  there are ways to get the muscular change that involve addressing the underlying reasons for it being what it is, that will NOT result in a conflict of wills or a power game.

For example ... it is possible that if you address the child’s stress level before the meltdown, there is a good chance the engagement will not become disruptive. Understanding that this means making sure her/his stress profile is accommodated and her/his window of tolerance is wide, or her/his trauma is not triggered is different to asking her/him to calm down. Understanding that s/he may not have firing inhibiting neurons in her/his basal ganglia will change how you go forward with setting up acceptable engagements. This undestanding comes from being able to read the muscular patterns correctly and in a timely manner.

So the wholistic view of looking for the true cause(s) underlying the muscular contraction patterns is a way to foster the whole person in their journey to constructive engagement and the development of the ability to choose a response i.e. to say not be stuck in obligatory firing patterns and behaviours.

The 6 areas of influence are: 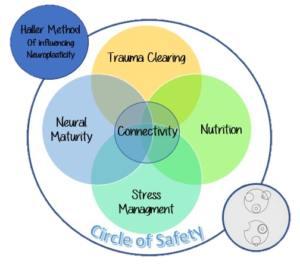 The Haller Method can be said to establish choice within safety. It creates the platform for dysmantling obligatory response patterns. 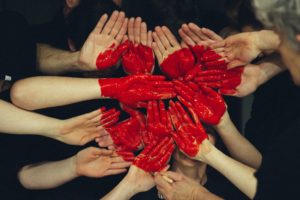 Group classes where you will learn how to use the extremely effective techniques used by Maxine Haller, at your own clinic. Classes are geared toward therapists who want in-depth knowledge on how to grow neural pathways and practically apply neuroplasticity research in clinical settings. 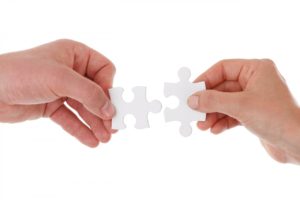 With over 25 years of experience in Occupational Therapy and training and the wealth of knowledge that comes from that Maxine Haller is available for mentoring sessions tailored to your needs. Take advantage of her innovative method in your own practice through one-to-one mentoring sessions. 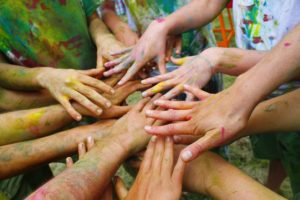 Download our free booklets and check out our blog. The invite to the 20 minute discovery session can be used for yourself personally or your own children - or to find out more about the mentoring / training process. Once you are a Haller Method student and have signed the HIPAA forms and agreements, we can talk about clients in a mentoring session. In addition therapists can attend Maxine's courses to see her work in action.

See what therapists are saying on the Reviews page